In February 2018, Pennsylvania residents were able to obtain medicinal marijuana. However, there is still some question whether legally obtained medical marijuana poses some risk for those that are driving while under the influence of marijuana. There is certainly some agreement that one shouldn’t drive a motor vehicle while under the influence or while impaired by the drug. Since that is the case, one might be facing a DUI charge.

Did you know that Pennsylvania laws actually prohibit a person from having what is known as a level of metabolites in their system, which is drug residue in the body? If you or someone you know ingests marijuana, they will have metabolites in their body for days, weeks and even months thereafter. Overall, if you’re driving with marijuana metabolites in your system, you are in jeopardy of being charged with a DUI if the arresting police officer finds you ‘stoned’ while operating a motor vehicle.

Most DUI investigations start with the police conducting a traffic stop for a minor violation, such as speeding, failing to use a turn signal, or even coasting through a stop sign, all relatively minor violations.  In many cases, while interacting with the driver, the police develop or notice evidence of driving under the influence, such as the odor of alcohol or marijuana, and the traffic stop then becomes a DUI investigation.  In most drunk driving cases, the police administer field sobriety tests or breath tests. The police are legally permitted to arrest a person and invoke the Implied Consent law if the police have probable cause to believe that the person is violating the Pennsylvania DUI law. Pennsylvania law prohibits a person from having marijuana metabolites in the body while the person is driving, the police would arguably have probable cause to arrest if the police were aware that the driver had a medical marijuana card.  The police may also question the driver about marijuana consumption.  If the driver admits to having ingested or taken marijuana, the driver is thereby giving the officer probable cause to believe that the officer will find marijuana metabolites in the driver’s blood.

While the use of marijuana for medicinal purposes is now legal, the Pennsylvania DUI law still prohibits those people from driving with marijuana metabolites in the body.

The laws are still relatively new and we keep up-to-date on ensuring your driving privileges remain in-tact. We have shared articles in the past about the Philly DA’s Office saying they won’t prosecute cannabis users for DUI unless they are actually stoned but what about in Montgomery county where our offices are located?

To stay abreast of the ever-changing laws, add us to your contacts and feel free to contact us directly via email at elg@paduilawyer.com. We’re happy to answer any questions you may have. If you’ve been arrested under these circumstances, now is an even better time to get in touch. Call any time during normal business hours: 215.542.9333. 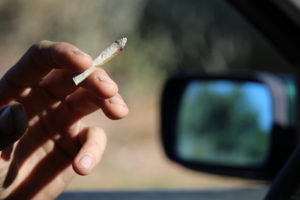