An ignition interlock device or breath alcohol ignition interlock device (IID or BAIID) is a breathalyzer for an individual’s vehicle. It requires the driver to blow into a mouthpiece on the device before starting or continuing to operate the vehicle. If the resultant breath-alcohol concentration analyzed result is greater than the programmed blood alcohol concentration the device prevents the engine from being started. The interlock device is located inside the vehicle, near the driver’s seat, and is directly connected to the engine’s ignition system.

Pennsylvania State law makes the Ignition Interlock requirement mandatory for first-time and repeat DUI offenders with high blood alcohol levels and for individuals who receive an operating privilege suspension as a result of a chemical test refusal violation. An individual with an Ignition Interlock requirement who seeks a restoration of operating privileges, is required, as a condition of issuing a restricted license, to either have any motor vehicle to be operated equipped with an Ignition Interlock system and remain so for the duration of the restricted license period or, if there are no motor vehicles owned, registered, or to be operated, so certify in accordance with PennDOT’s regulations.

How Does it work?

An ignition interlock interrupts the signal from the ignition to the starter until a valid breath sample is provided that meets maximal alcohol guidelines. At that point, the vehicle can be started as normal. At random times after the engine has been started, the IID will require another breath sample, referred to as a rolling retest. The purpose of the rolling retest is to prevent someone other than the driver from providing a breath sample. If the breath sample isn’t provided, or the sample exceeds the ignition interlock’s preset blood alcohol level, the device will log the event, warn the driver, and then start up an alarm. until the ignition is turned off, or a clean breath sample has been provided. A common misconception is that interlock devices will simply turn off the engine if alcohol is detected; this would, however, create an unsafe driving situation and expose interlock manufacturers to considerable liability. Ignition interlock devices do not have an automatic engine shut off feature.

When is Ignition Interlock required?

How much does the Ignition Interlock System cost?

How long must the ignition interlock system be on the vehicle?

Who approves the ignition interlock devices?

At The Law Office of Ed Guyer, we take your case seriously. We hope we’ve educated you about option you might have to restore your driving privileges. Just don’t go it alone. We’ve got your back and hope to hear from you soon. 215.541.9333, elg@edguyerlaw.com 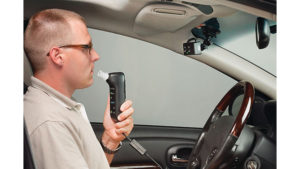